The first time I ever ventured into the Boston Seaport area was for my interview with Maria and Jen – my now co-workers! Now that I’m a little more familiar with the area, I can’t believe I spent a whole year in Boston without coming down here.  There’s an endless number of attractions and things to do in the Seaport, so I’ve put together a list of some of the most notable! I hope this inspires you to get down here and have some fun – sooner rather than later!

The Seaport District has some insane bar venues and nighttime entertainment locations.  Take Lucky’s Lounge as an example; it’s an intimately sized roaring-twenties themed bar with a menu that might as well be titled “Drunk and Hungry.” I’m talking BLTs, pulled pork sliders, burgers, parmesan fries, nachos, and any other jumble of syllables you could ever throw in the bartender’s direction.

If you prefer to lounge in locations that appear to have been taken straight from Wolf of Wall Street, then I highly recommend the Lookout Rooftop Bar.  Located at the top of the Envoy Hotel, it allows guests to see out over the city and the harbor.  I mean come on, look at that view! 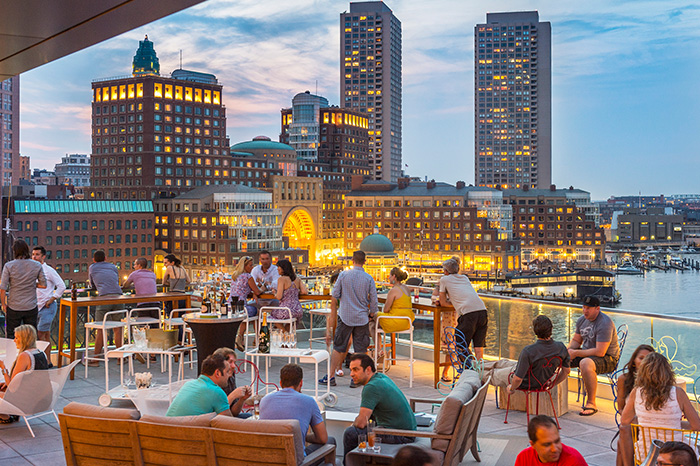 What’s that? One rooftop bar isn’t good enough for you, you say? Well you’ll be pleased to know that the Seaport District has not just one but four more rooftop bars – The Sky Lounge, YOTEL Boston’s rooftop bar, Legal Harborside and The Whiskey Priest.  Any mathematician knows that comes to a total of five rooftop bars.   “There are five rooftop bars” cancels out any excuse a person could ever have for not coming to the Seaport Area.  That’s just scientific fact.

I hope now you feel motivated to take a spin around the Seaport District, whether or not you’ve been here before.  It’s easily accessible by car, plane, train, or bike (as mentioned) and with the weather only getting warmer and the global water levels only getting higher, there’s never been a better or more urgent time to get down here and enjoy everything this slice of Boston has to offer.